Like most of the counties in the Central Valley, San Joaquin is still in the purple tier.

San Joaquin County is among the 11 California counties remaining in the purple tier this week, a blow to the county's hopes of beginning to reopen schools and businesses.

The county had qualified for the red tier last week thanks to a low COVID-19 test positivity rate of 4.4% and health equity metric of 4.2%. If it had maintained those numbers this week, it would have been eligible to move despite having a relatively high case rate.

However, San Joaquin’s health equity metric, which measures the test positivity of its most disadvantaged neighborhoods, jumped to 5.8%. Under the state’s new criteria for tier assignment, counties who have a positivity rate and health equity metric two tiers below their current position for two weeks can move, even if their case rate is otherwise too high.

A health equity metric of 5.8% puts San Joaquin just out of reach of the orange tier, which requires that statistic to be under 5.3%.

The county also failed to move despite relaxed criteria for the red tier implemented last week, triggered by the state’s administration of over two million vaccine doses to its least wealthy communities. Under the new guidelines, the red tier requires 10 daily cases per 100,000 people instead of seven.

This week, San Joaquin reported 9.9 cases per 100,000 people, which normally would have put it in the red tier. However, the county administered fewer COVID-19 tests than the state median this week, causing the state to increase its case rate used for tier assignment to 10.5, just above the requirement for red.

San Joaquin also recorded a positivity rate of 4.5%, a slight increase from last week’s of 4.4%. The county’s intensive care unit capacity has also been steadily improving, last week falling below 100% for the first time since mid-November.

Under the state's guidelines, only kindergarten and elementary schools can open while a county is in the purple tier. Multiple county school districts, including Lodi and Lincoln Unified, had plans to return high school students (as well as younger grades) in the coming weeks, contingent upon San Joaquin's entry to the red tier.

Most of California is currently in the red tier, with Sacramento, San Diego, and Riverside among the counties moving this week. The state has an overall case rate of 6.5 per 100,000, putting it among the lowest in the nation, with a positivity rate of 2.3%.

Seven of the 11 counties still in the purple tier are in the Central Valley. 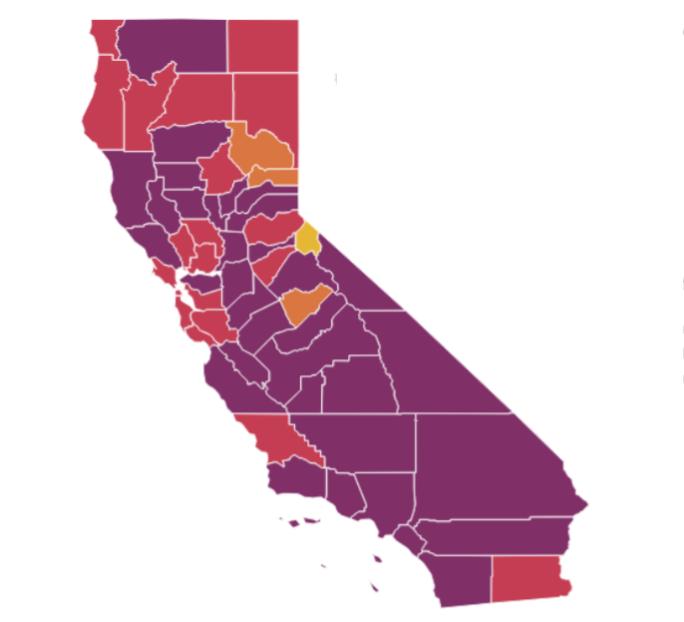